The Entrepreneurs of Siemens AG 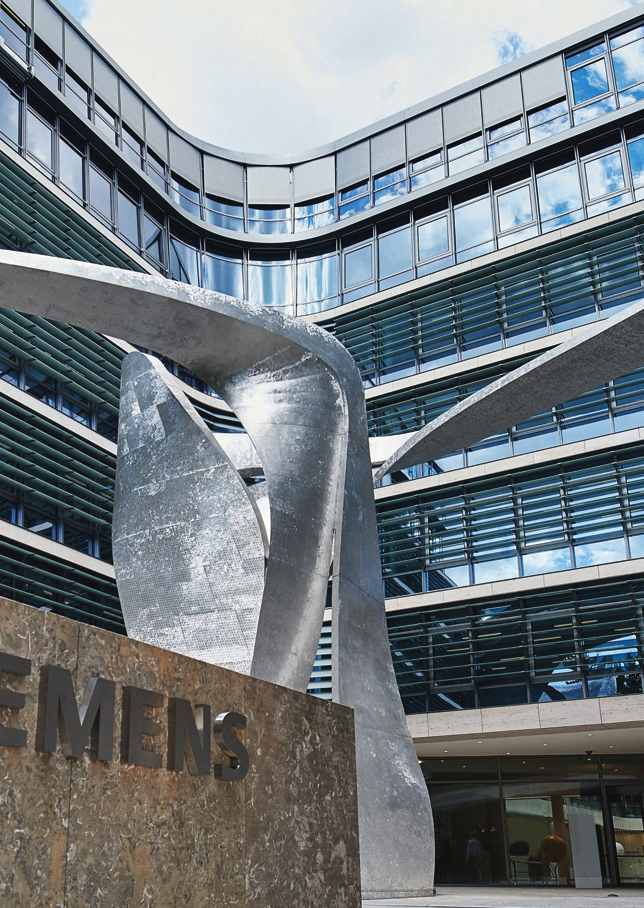 From the company’s beginnings to 1966, the “Heads of the House” at Siemens had always come from among the Siemens family. That all changed when Siemens AG was founded: Gerd Tacke, in 1967, became the first manager who rose from the ranks to head the company. He and all his successors, right down to Joe Kaeser today, have still been guided by the principles of shaping the future and leaving an even better company for their successors to lead.

“If our company – while still respecting the tradition that has made us so great – can make the necessary changes without undue delay, then I have no doubt that we will also be able to master the great challenges that we will face in the future.” With the founding of Siemens AG, the S&H-logo would no longer stand for “Siemens & Halske,” but rather for the “House of Siemens”.

Today’s Siemens AG was founded on October 1, 1966, through the legal and organizational consolidation and absorption of Siemens & Halske AG, Siemens Schuckertwerke AG and Siemens-Reiniger-Werke AG. At first, all members of the merged companies’ Managing Boards remained in office to form the new company’s full Managing Board. From among this group, the Supervisory Board appointed a three-member “Presidential Committee,” though this arrangement remained in effect for only two years. 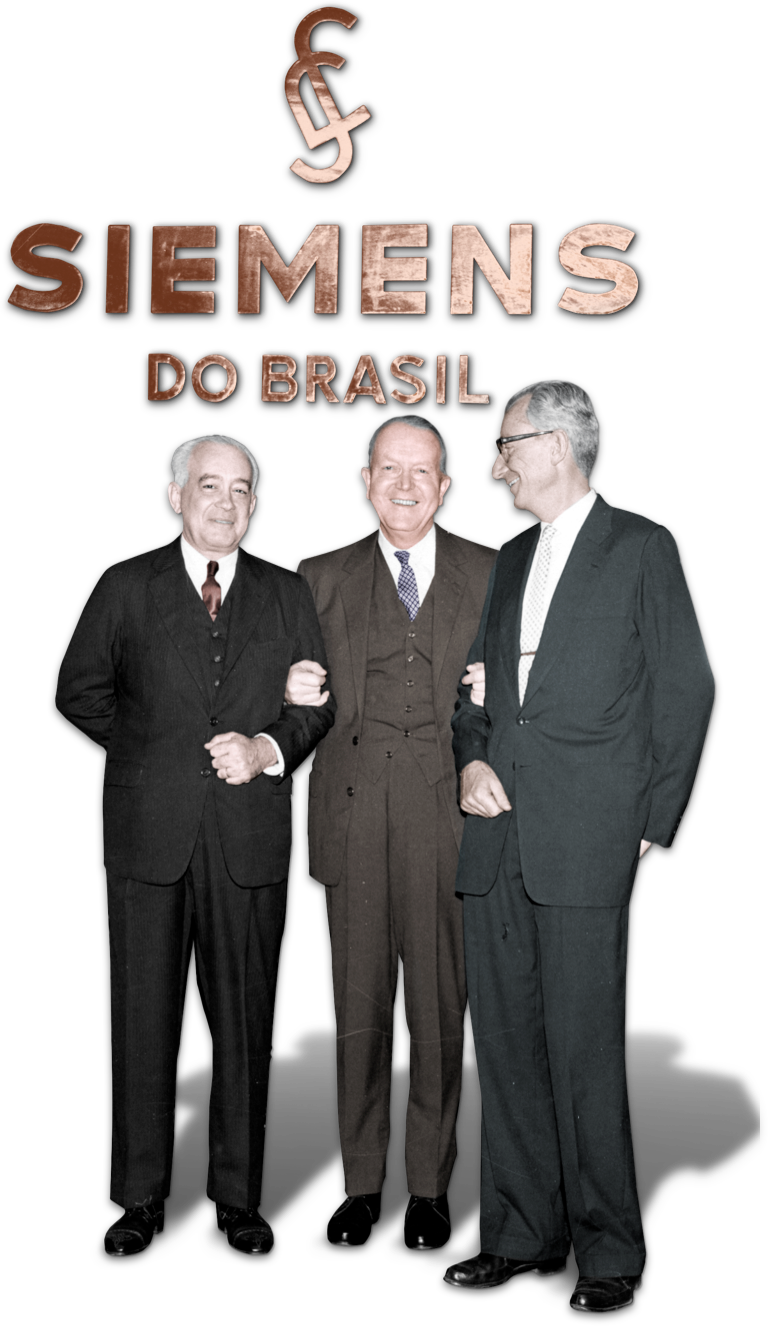 Gerd Tacke was the first President and CEO of the newly formed Siemens AG. In the 1950s he assisted Ernst von Siemens primarily with developing the company’s international business. Among his colleagues he came to be known as the “Foreign Minister of the House of Siemens.” In his new position as well, he still kept his eye on international markets – and successfully. By 1969 Siemens had its own companies in 48 countries all over the world. In fiscal 1968/69 their revenues exceeded five billion DM for the first time. 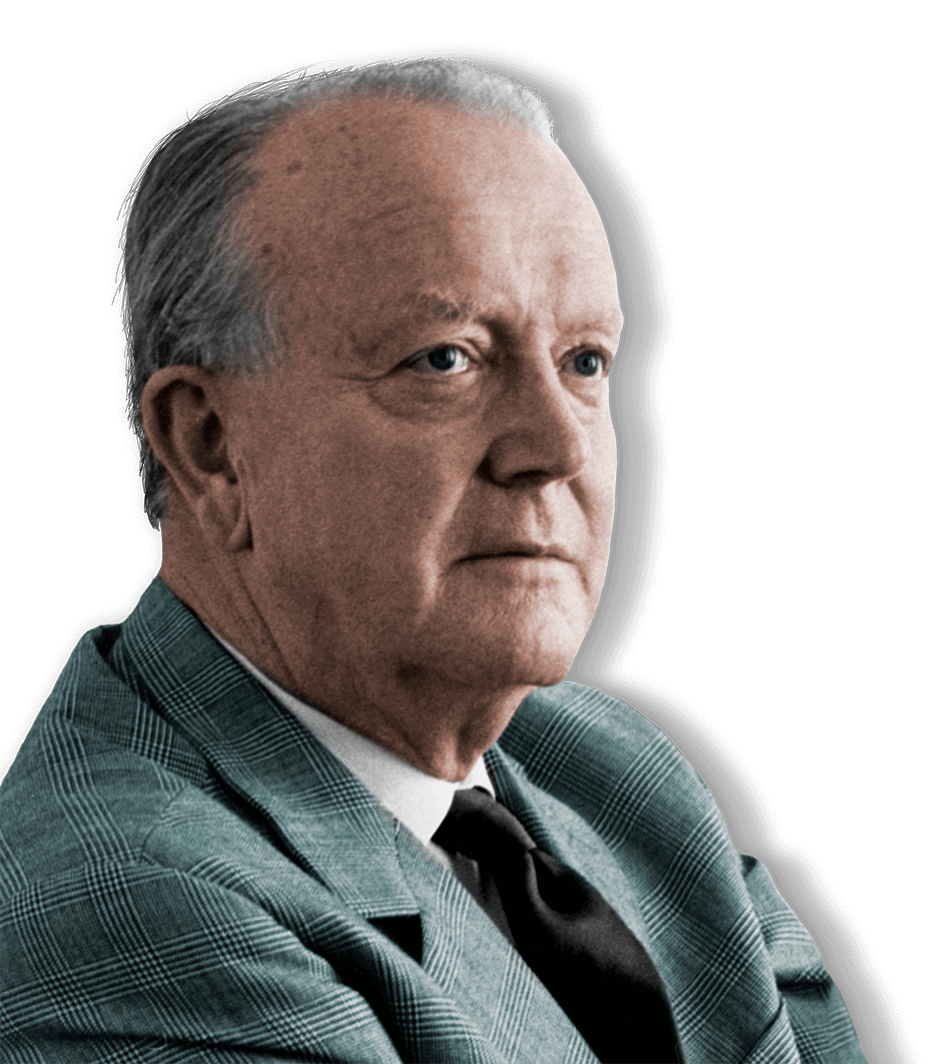 Shaping Siemens inside and out

As head of international operations, Gerd Tacke achieved crucial advances in business with customers outside Germany and built up a highly effective international organization. Among his colleagues, he became known as the “Foreign Minister of the House of Siemens.”

In 1967, Tacke was appointed Spokesman of the Presidential Committee of the newly founded Siemens AG. The next year, he became the first Chairman of the new company’s Managing Board. His determination to lend clear shape to internal structures and procedures made a key contribution to the reorganization of the Siemens AG from 1966 to 1969 that resulted in the adoption of the company’s Basic Corporate Principles.

He left the Managing Board in 1971, and a year later was elected to the company’s Supervisory Board, where he remained a member until 1978. Now the task was to revise the company’s structures and organizational forms to fit its expanding business. To enable Siemens to respond more flexibly to customers’ needs and the challenges of increasingly globalized competition, an interdisciplinary team of “young people and old hands” developed a new corporate structure. It organized Siemens as a system of operating Groups, Regional Companies and central departments. In 1970, Siemens founded Siemens Corporation, based in Iselin, New Jersey, and began systematically tapping the American market for electrical equipment. Under Bernhard Plettner’s leadership, the company began steadily and systematically expanding its presence there in 1973. Numerous investments and joint ventures carried the German electrical company to good market positions in a number of strategically important lines of business.

Bernhard Plettner became President and CEO of Siemens AG in 1971. An electrical engineer who had been with the company for more than 25 years by that time, Plettner emphatically encouraged development in forward-looking technologies like data processing. Under his guidance, the company expanded its position internationally, and gave special attention to tapping the American market.

In 1981, Plettner became the first person from outside the Siemens family to be named Chairman of the Supervisory Board. He held that position until 1988. During Karlheinz Kaske’s time in office, Siemens declared that developing megabit memory chips was a strategic corporate objective. By the end of 1987, four years after the MEGA Project was launched, the first 1 Mbit chips went into production in Regensburg. In cooperation with international partners, the company was able to keep storage capacity growing with every new generation of chips. These successes were the foundation for many of Siemens’ innovations in communication, information and automation technology. Karlheinz Kaske had been a member of the Siemens AG Managing Board since 1975, before assuming the board’s chairmanship at the end of January 1981. Along with his many other areas of focus, this physicist advanced Siemens’ technological evolution from conventional electrical engineering to electronics, expanded the company’s international business, and toward the end of his time in office, completed a forward-looking reorganization. He thus laid the groundwork for the company to hold its own in a new era of deregulation and global competition. As the 1990s began, many thought of Siemens as a purely German company. Yet to be competitive it was crucial to give far more attention to markets’ rising globalization. Accordingly, one aim of the top program that Heinrich von Pierer initiated early in 1993 was to systematically tap the new markets in the Asia-Pacific region, and in North America.

To safeguard successful exports for the long term, Pierer emphatically urged building up value added and expertise on location. By the spring of 1997, Siemens was already virtually an area-wide presence in the Asia-Pacific region, with 45,000 employees, some 70 joint ventures, and more than 60 production facilities. The captain at the helm

When Heinrich von Pierer took office as President and CEO in 1992, Siemens’ business environment had deteriorated significantly. Bold action was called for. His restructuring measures like the Ten-Point Program and the Siemens Management System (SMS) prepared the company for a top-to-bottom transformation, and made Siemens fit for globalization. Even though his career ended abruptly with the Compliance affair, that does not alter Pierer’s significance for the company’s further development and organization. 2Focus and push the top program with top+

On March 12, 2001 Siemens is listed on the New York Stock Exchange.

Siemens celebrated its 150th anniversary in 1997 – normally a reason for celebration. Yet the company went through one of the most difficult business years in its history. Heinrich von Pierer responded to the downturn in 1998 by introducing his “Ten-Point Program” to enhance profitability on a sustainable basis. The plan, under its principle of “buy, cooperate, sell or close,” had more radical, more systematic consequences than any corporate program that had gone before. Klaus Kleinfeld came to the head of the global corporation on January 27, 2005. With an eye to the megatrends of the future – the increasing concentration of population in cities, world population growth in combination with demographic change – he focused on energy, infrastructure and healthcare as fields with extensive future applications. Based on these emphases, he introduced a radical reorganization of the portfolio. Klaus Kleinfeld, who held a degree in economics, joined Siemens in 1987 and was with the company for about two decades. On January 27, 2005, he was appointed President and CEO. That April, under his leadership, Siemens launched its company-wide “Fit4More” working program. Thanks to this program, by the spring of 2007 every unit had consistently achieved or surpassed its target margins for the first time. And during his term of office, Kleinfeld also initiated important strategic expansions of Siemens business activities, and reorganized the Information and Communications business area.

Klaus Kleinfeld resigned in 2007 as a consequence of the Compliance crisis. When Peter Löscher took the helm of Siemens in July 2007, the Compliance affair had thrust the company into a profound crisis of confidence that threatened its very existence. Briskly and firmly, the native Austrian turned the company toward a new course, and within just a year and a half after taking office, his diligent work on compliance had made it possible to close the book on a regrettable chapter of corruption charges.

He also reorganized business operations into the Industry, Energy and Healthcare Sectors, which were later joined by Infrastructure & Cities. This arrangement continued the focus that Klaus Kleinfeld had initiated on the megatrends of the future. He regarded evolution toward a green global economy as a “gigantic opportunity” for Siemens. A time of renewal

Peter Löscher was the first President and CEO of Siemens AG to be appointed from outside the company. His great achievement was that he firmly established a culture of integrity in house that came to be regarded as exemplary all over the world. He was the right man at the right time, whose vigor and uncompromising determination restored the company, battered by the Compliance scandal, to a position of high regard and considerable success. He successfully led Siemens through the challenging era of the global financial and debt crisis. – our path into a
successful future

Joe Kaeser succeeded Peter Löscher as President and CEO on August 1, 2013. Following a phase of economic challenges, his “Vision 2020” gave the company a new strategic orientation and set a new course for the future. Joe Kaeser is a “Siemens man” through and through. He joined the company at the young age of 23, and gradually worked his way up through various posts, both in Germany and abroad, to become the company’s Chief Financial Officer. On August 1, 2013, he became President and CEO, and his “Vision 2020” and its successor program are leading Siemens into the second decade of the 21st century. Kaeser restructured the company. His new portfolio strategy – focused on electrification, automation, and especially digitalization – his new innovation methods, and his plans for a forward-looking corporate structure not only attracted attention, but injected important new momentum. Joe Kaeser did not stop with strategic and organizational decisions. In August 2018 he turned his focus to the greater good, giving Siemens a purpose that formed the core of his “Vision 2020+”. As he saw it, Siemens had to step up to its responsibility and create sustainable benefit from a position of strength – for its shareholders, its employees, its customers, its business partners and societies throughout the world.

“A company must contribute to the welfare and advancement of society – not just for the short term, but sustainably, in the interest of future generations. We call that Business to Society.” Those who study the history of companies are witnesses to exciting developments; they delve into a succession of highs and lows, successes and failures, economic and social changes. And they become acquainted not only with the founders but also with the people who successfully develop the companies, who guide and lead. This is exactly what unfolds in the new book from the Siemens Historical Institute. Through 13 detailed portraits, the book relates how the more than 170-year history of Siemens is interwoven with the history of Germany, Europe, and the world. From the founder, Werner von Siemens, to Carl Friedrich von Siemens to Joe Kaeser, it is clear that the company needs people at the top who lead with courage, drive, and a sense of responsibility, who are not afraid to face the challenges of the times and to shape the future.