At the beginning of the 20th century, Siemens developed and tested its own airship technology in Biesdorf near Berlin.

Siemens occasionally ventured into unusual terrain. At the beginning of the 20th century, for example, the electrical engineering company conducted its own research into airship travel in Biesdorf near Berlin for several years. Siemens engineers did not only develop a special type of airship for this purpose, but also constructed a true rarity: a gigantic revolving airship hangar that could be aligned to the wind for safe entry and exit of the aircraft.

1887 – Purchase of the Biesdorf estate

Until the 1920s, Siemens’ activities extended beyond electrical engineering – with its product portfolio even encompassing automobiles, aircraft engines and airplanes. Nevertheless, the company’s construction and testing of airships from 1907 to 1912 was remarkable even by Siemens’ standards. Siemens-Schuckertwerke built its own airship hangar in Biesdorf near Berlin expressly for this purpose. The location was available because Werner von Siemens had purchased the Biesdorf estate and castle in 1887 for 1.2 million marks. Situated on Berlin’s eastern periphery, the estate covered an area of 600 hectares. Since Werner von Siemens’ wife did not want to use the manor as a residence for their later years, he transferred the property to his second-oldest son, Wilhelm, in 1889. Two decades later, Wilhelm transformed parts of the estate into a center of international airship travel.

At the beginning of the 20th century, airships played an important role as development boomed in the field of aviation. Numerous inventors and designers, including Count Ferdinand von Zeppelin, undertook successful airship flights during these years. Encouraged by these advances and motivated by the prospect of lucrative orders, Wilhelm von Siemens decided in 1907 to become actively involved in developing what was then known as motorized airship travel. The Siemens engineers would require a large hangar to accommodate a “test airship.” With Wilhelm von Siemens’ approval, the hangar was built on the Biesdorf estate. In July 1907, Karl Janisch, Siemens’ head architect at the time, was commissioned to design the structure. The hangar was built by Steffens & Nölle AG, a company in Tempelhof that erected Berlin’s radio tower some years later and is still in existence today. 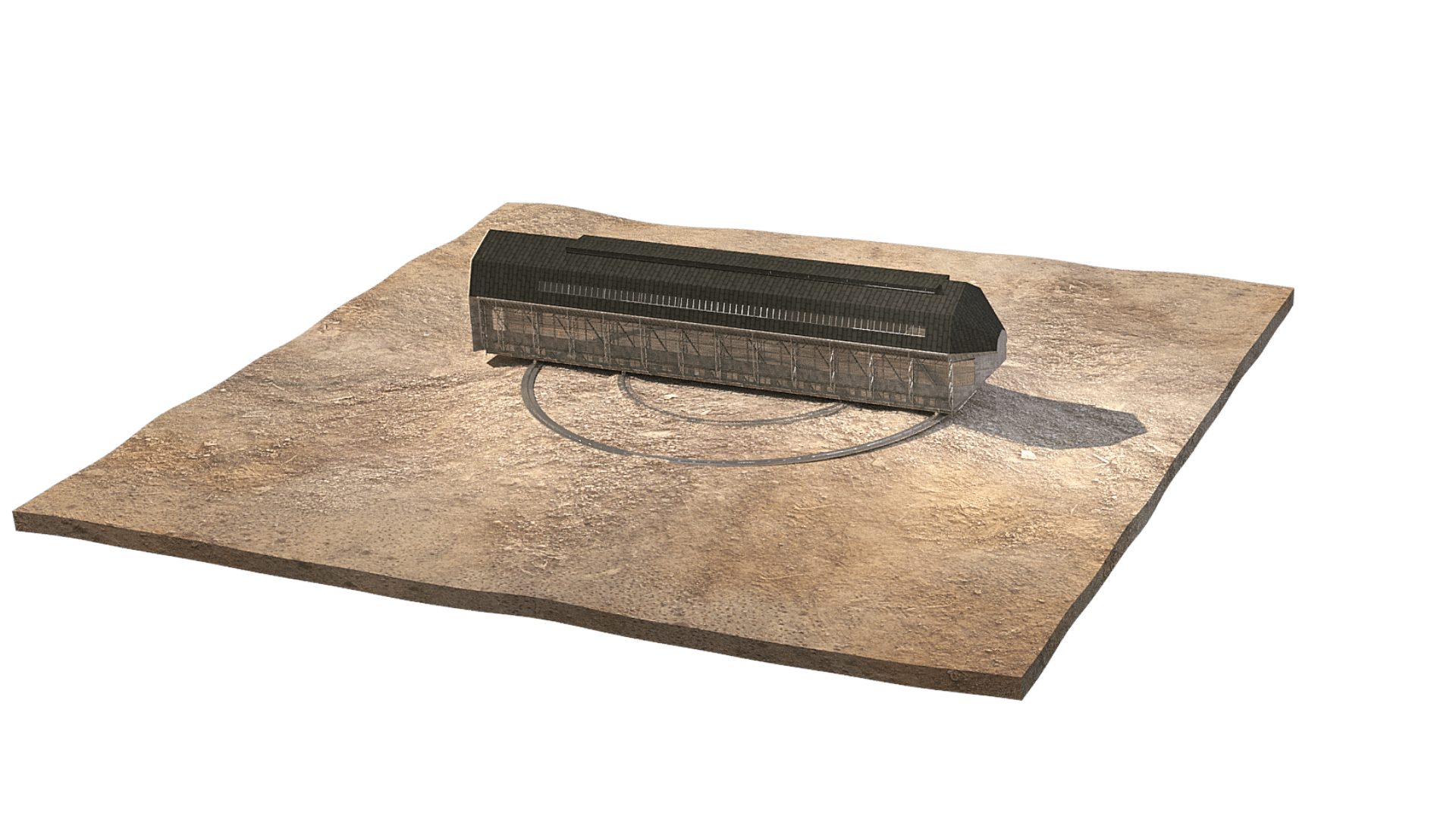 Completed in 1909, the hangar was huge: 136 meters long, 25 meters high and 30 meters wide. What’s more, it could be rotated – enabling airships to be stowed and removed on the lee side, sheltered from the wind. Accidents were a common occurrence when airships were transported into hangars: strong crosswinds could arise at the large, usually stationary entrances, with substantial risk for man and machine when maneuvering airships. This danger had now been eliminated. Despite its seemingly light design – with a large number of glass panels and a roof constructed of wood and cardboard – the hangar in Biesdorf weighed 1,200 tons. Most of the weight rested on a central cement pivot with a diameter of eight meters. A total of 24 carriages distributed along a slewing ring bearing comprising a larger outer ring and a smaller inner ring rotated the hangar roughly two meters above ground level. The system was powered by two gasoline engines and two electric motors. It took an hour to rotate the hangar completely.

1911 – The airship from Siemens-Schuckert takes off

The Siemens airship took off for its first test flight in January 1911 – the culmination of several years of work by a team of engineers and technicians. Since the technology for so-called rigid airships was already far advanced at the time, Siemens’ developers had in 1908 started working on a prototype designed in accordance with the alternative principle of the non-rigid pressure airship, or “blimp.” With the rigid framework eliminated, the blimp required a greater volume of lifting gas but was substantially lighter despite its increased load. The crew, generally eleven members, first took short flights in the vicinity of Biesdorf, primarily to monitor and test the on-board power and flight systems. With an overall power capacity of 500 HP, the airship reached a speed of 72 kilometers per hour.

1912 – The last voyage of the Siemens airship

When the airship took to the skies over Berlin, the passengers were often not all Siemens employees. For instance, representatives of the Prussian high command often took advantage of the opportunity to go along for demonstration flights; after all, airships were primarily designed for military use at the time. The most renowned passenger was certainly Count von Zeppelin himself, who didn’t want to miss the chance to experience the performance capability of a competitor’s airship first-hand. Company head Wilhelm von Siemens was also on board for one of the flights, which lasted up to several hours. The Siemens airship’s last voyage took place on May 12, 1912 – although no one realized it would be the last flight. As the airship was returning to the Biesdorf hangar, there was a technical problem with the safety cable, and the landing was unsuccessful. The airship was damaged when it descended into the treetops on an adjacent wooded property. Only after extensive repairs at the site could it be safely flown back to the hangar.

1914 – Dismantling of the Siemens-Schuckert airship

The Siemens airship made a total of 73 test flights in 1911 and 1912. Although most were successful, the trial program was discontinued after the failed landing in May 1912. However, the reason for ending the program was not the minor accident but the realization that the gas-airship design was inferior to the rigid construction of the zeppelins and that the prototype, although serviceable, could not be adapted for series production. With the military placing its bets on the competition, the Siemens airship was dismantled in early 1914, having been taken out of service, emptied of gas and stored in the hangar since 1912. In view of this development, Wilhelm von Siemens decided not to go in the civil aviation business. The hangar whose construction he had commissioned remained intact for several more years and served as a military training center during World War I but was demolished in 1920 under the Versailles peace treaty.

The high-rise switchgear plant in Siemensstadt