At the end of the 19th century, urban mobility was one of the most pressing issues of our time in rapidly growing metropolises like Berlin. Werner von Siemens recognized this early on and proposed the construction of an electrified elevated railway. But he was ahead of his time, and the idea was rejected. Technical progress, however, cannot be halted: More than 20 years later, Werner von Siemens' idea became reality. Berlin's elevated railway, inaugurated in 1902, became one of the city's most characteristic features and continues to shape the cityscape to this day.

Berlin’s population grew rapidly in the 19th century. Home to some 170,000 people in 1800, the city had more than 825,000 residents by 1871 – due in part to the incorporation of neighboring communities. The city’s transportation infrastructure was unable to keep pace with the boom – with serious consequences for the speed, safety and comfort of travel in the Prussian capital. Following the development of new electrical systems in the mid-nineteenth century, plans were drawn up to solve the city’s transport problems by means of an electric railway that would run on overhead tracks and below ground. As early as 1880 – that is, before the installation of the world’s first streetcar system – Werner von Siemens submitted plans to the Berlin authorities for constructing an elevated electric railway. His design was based on an elevated system already in use in New York. The proposal was rejected due to protests by Berlin residents. However, Werner von Siemens was so convinced of the rightness of his idea that he submitted two further proposals to the authorities in the ensuing years. The breakthrough came only after his death in 1892. In 1896 – several years after its proposal – the construction of an elevated railway, together with a 90-year operating license, was finally approved. The picture shows an illustration from the first proposal for an elevated electric railway in Friedrich Street in Berlin in 1880.

Work began in September 1896 – four years after Werner von Siemens’ death and four months after Siemens & Halske’s commissioning in Budapest of the first underground railway on the European continent. However, Berlin residents opposed the building of the line’s overhead viaducts, citing “the massive disfigurement” of the urban environment, “the clouding” of the streets below and anticipated noise pollution. Demands to continue the line underground multiplied. To give the huge project a broader financial basis, Siemens & Halske established – together with Deutsche Bank – the rail company Gesellschaft für elektrische Hoch- und Untergrundbahnen Berlin in April of 1897. Henceforth, Siemens & Halske was the general contractor, while the rail network’s planning and implementation were the responsibility of the Gesellschaft für elektrische Hoch- und Untergrundbahnen Berlin. The photo shows construction work on the viaduct at the Kottbusser Tor in 1901. 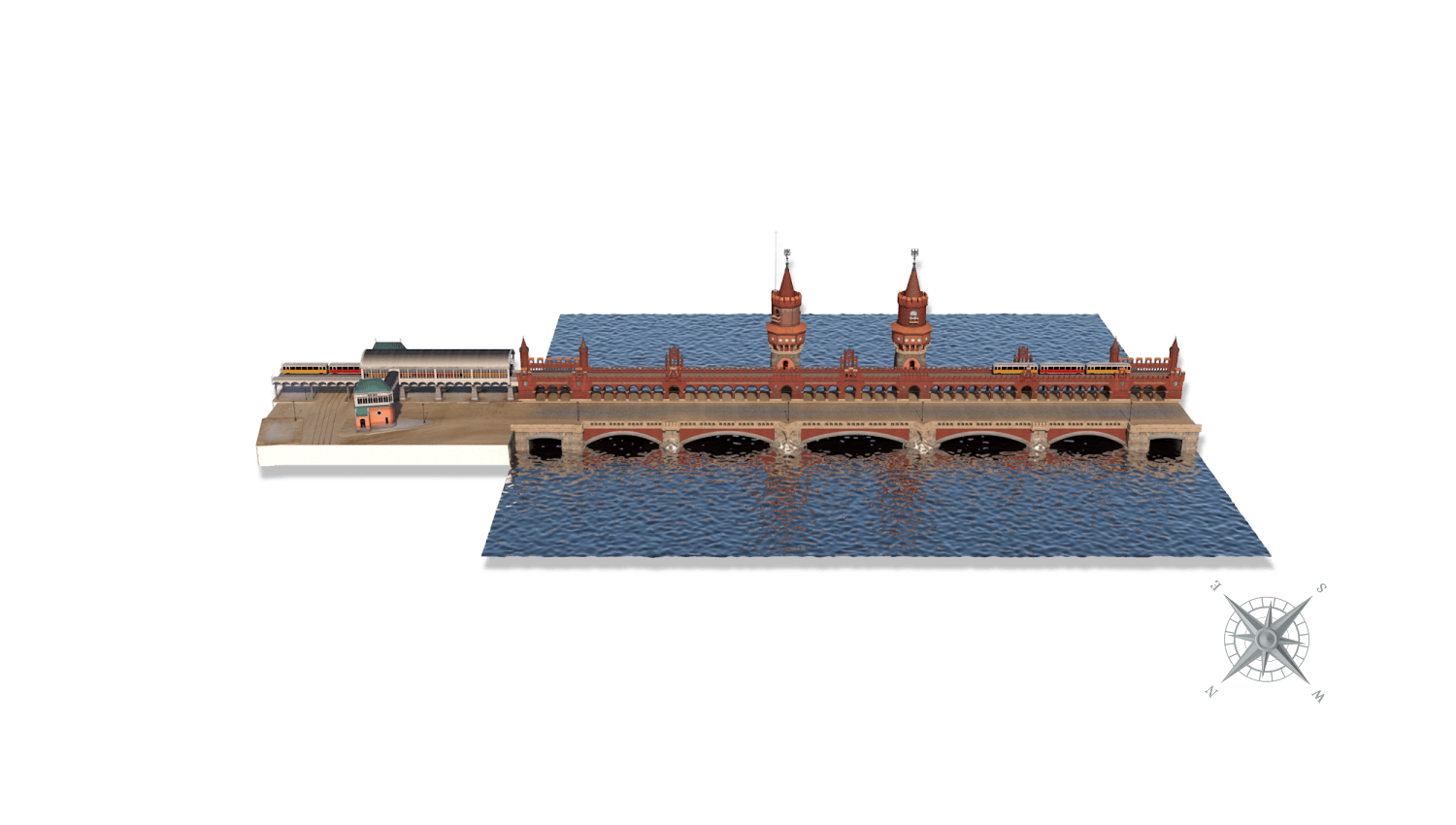 The railway took about five and a half years to complete. The first trial runs on selected sections of track started in December 1900. In the fall of 1901, vehicle assembly began in a workshop at the Warschau Bridge. Following the commissioning of a dedicated elevated railway power plant on Trebbin Street, trial operation was begun on a section-by-section basis, and rail crews were trained.

One of the train stations was built at the former Stralau Gate and directly linked to the Oberbaum Bridge, which had been erected only shortly before. The station’s train shed was constructed on the basis of a Siemens & Halske design from 1891. Its structure, highly innovative for its day, consisted primarily of steel and glass and featured lateral platform entrances via separate stairways. The station, which was renamed “Osthafen” in 1924, was completely destroyed in World War II and not rebuilt. Out of use for 35 years after the war, the Oberbaum Bridge was only reopened for traffic following its complete renovation in 1995. The viaduct is all that remains of the first railway of 1902.

On February 15, 1902, the Berlin newspaper Lokal-Anzeiger announced: “Today, Berlin’s elevated and underground electric railway was finally opened.” The first section of the line from Stralau Gate (near Oberbaum Bridge) to Potsdam Square had gone into operation that morning, making Berlin the fifth European city – after London (1890), Budapest (1896), Glasgow (1897) and Paris (1900) – to boast an underground electric railway system. So-called “VIP trips” had been organized in the weeks before the official opening. One of those trips, which took place in January 1902, is shown in the photograph below. Three days later, the six-kilometer line was opened to the general public. Today, most of this line is part of Berlin’s subway line No. 1. The 11.2-kilometer main line from Stralau Gate to today’s Ernst Reuter Square was commissioned section-by-section until the entire stretch was fully operational on December 14, 1902. The electric railway system transported nearly 19 million passengers in 1902. In 1903, the figure was 29 million. In the following years, the system was continuously expanded until, by the fall of 1913, Berlin’s underground system had a total length of more than 35 kilometers. The outbreak of World War I brought a halt to further construction.

Vehicles of the so-called A I series were in service on the line from 1901 to 1926. These cars were built in several versions with different technical configurations for use as railcars, sidecars and motor cars. The first vehicles featured simple high-voltage electrical systems and a wooden framework. Later models used low-voltage controls and a steel skeleton. The first cars began to be phased out in 1929. World War II brought heavy losses. In 1949, the remaining cars were divided between East and West. In the West, they were finally taken completely out of service in 1968. In the East, individual cars continued in use until the fall of the Berlin Wall. A few of the cars are still preserved as museum exhibits. The photo shows the elevated track on the viaduct, looking toward Bülow Street station in 1902.

The Berliner Werk in Markgrafenstrasse