The Schaltwerk high-rise in Berlin's Siemenstadt is a true icon of industrial history. The building, which went into operation in 1928, was the first high-rise factory building in Europe and something extraordinary at that time. Siemens architect Hans Hertlein went completely new ways with the construction: For the first time, industrial production processes were arranged one above the other. Modern switchgear technology was manufactured on a total of eleven floors and more than 34,000 square meters.

Until the end of the 19th century, direct current was used to supply power in large cities. However, as the power grid continued to expand, alternating current proved to be more efficient. Switchgear systems were needed to operate the grid – systems which beginning in 1917 were manufactured at the plant (later known as the switchgear plant, or Schaltwerk) in Siemensstadt. In 1916, construction had begun on a production hall with an area of more than 15,000 square meters. Located west of the administration building, the hall had been designed for aircraft production during World War I. As of November 1917, a good one-third of the facility was being used to manufacture switchgear. After aircraft production ended in 1919, the entire plant was used to produce electrotechnical equipment – and named Schaltwerk. Step by step, production was expanded and the complex was enlarged, covering some 20,000 square meters by the end of 1922. By 1913, 1,250 people were employed at the plant. 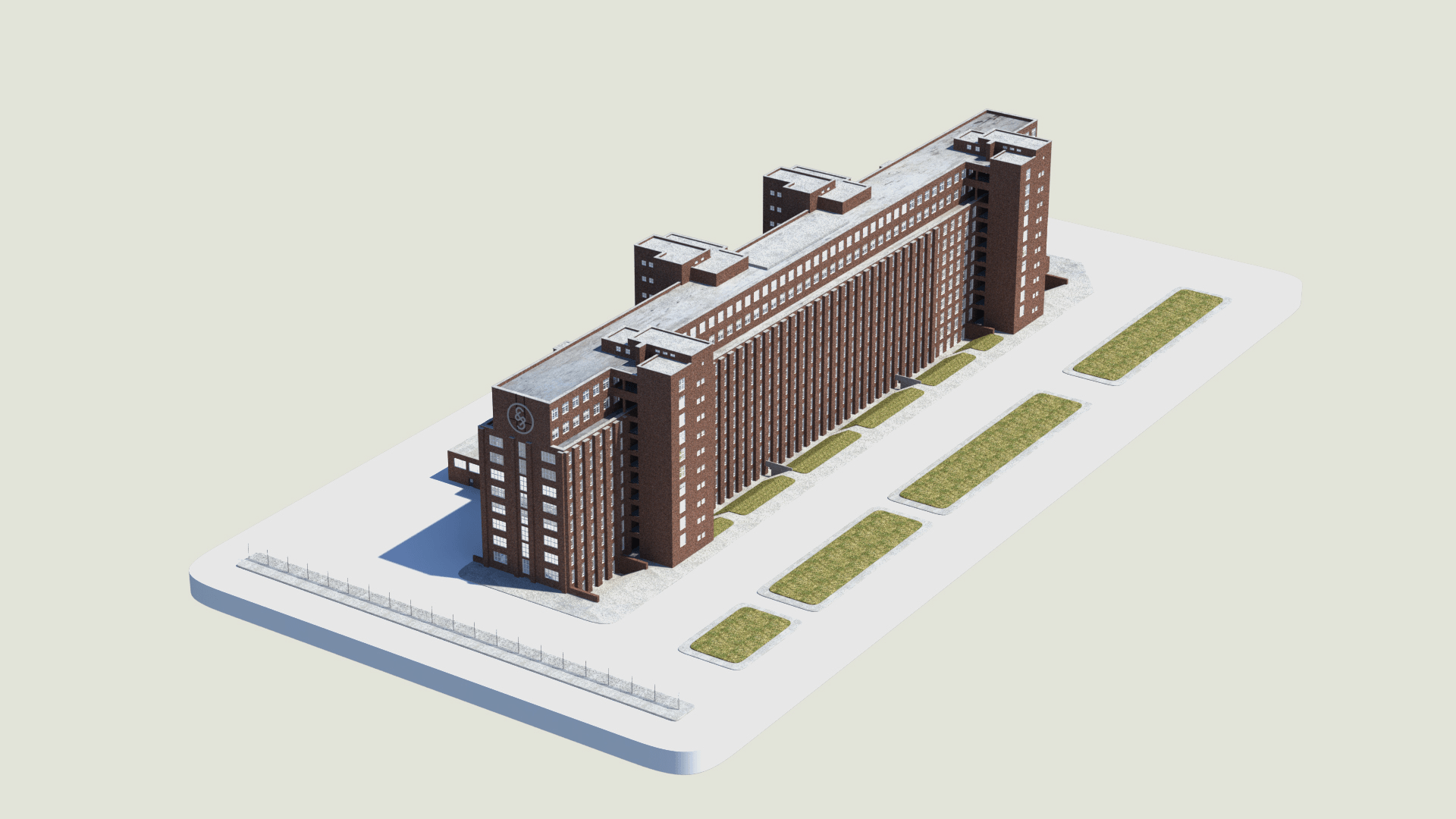 1928 – Construction of the high-rise switchgear plant

In 1900, switchgear was manufactured in a plant located at am Salzufer 11/12 in Charlottenburg. Due to capacity bottlenecks at the site, parts of production were moved to the switchgear plant in Siemensstadt starting in 1917. For cost reasons, management decided in 1926 to bundle all switchgear manufacturing at a single location. This entailed expanding the existing production facilities at the switchgear plant. During the planning phase, the idea of building upwards to create the necessary space arose –leading to the construction of Europe’s first high-rise factory.  In September 1926, Siemens’ Managing Board members earmarked 9.5 million marks for the expansion project. The centerpiece was an eleven-story high-rise building with a height of 45 meters. Two connecting structures linked the new building to the existing production hall complex. Completed in 1928, the new high-rise structure added more than 34,000 square meters of floor space to the switchgear plant.

Production at the high-rise switchgear plant was something very special: numerous manufacturing processes took place on different levels, over eleven stories (including the cellar). For instance, the heavy machinery of the processing workshops was located on the third floor, which was reinforced. The fifth floor was home to the apprentices’ workshop, above which the actual switchgear was manufactured on an assembly line. The plant management and the administrative department were located on the ninth floor, while the top floor housed the design offices. To enable the highly flexible partitioning of space, all stories were traversed by a hall that was 175 meters long and 16 meters wide.

The buildings in Siemensstadt were badly damaged during World War II. However, while bombs destroyed many of the low-rise buildings on the plant premises, the high-rise building remained largely unscathed. Reconstruction began even as several thousand tons of debris and scrap metal had to be removed. The widespread dismantling of equipment by the Soviets in 1945 made the new start even more difficult. Nevertheless, production in the high-rise building could already be partially resumed at the beginning of 1946. That same year, the reconstruction of the low-rise structures began, and by 1949, new orders were being processed. After this transition phase, new switchgear technologies and products were again developed, and the plant profited from the sustained economic boom. In 1959, the switchgear plant set a new record for workforce size, with nearly 5,900 employees.

1994 – An icon of industrial architecture

When the switchgear plant’s high-rise building and low-rise structures were designated as a cultural heritage monument in 1994, the site had long been a historic architectural icon of modern industrial culture. Already upon its completion, the high-rise building had been extolled as a “symbol of modernity.” Hans Hertlein, lead architect at Siemens as of 1915, found his very own straightforward and matter-of-fact language of form when designing the building. The structure typifies the New Objectivity style of the 1920s, which is characterized primarily by unembellished utilitarianism. The sole architectural ornaments were the logos – no longer existent – of the Siemens-Schuckertwerke on the front and rear of the building. The reduced, rational design became the epitome of Siemens’ plants and the prototype for later industrial buildings.

2017 – The switchgear plant celebrates its birthday

2017 marks the 100th anniversary of the switchgear plant. It’s still one of the most advanced plants and the largest facility of its kind in the world. Following expansion projects in the 1960s and the 1970s, the decision was made in 2010 to invest €70 million in an extensive modernization program. As part of the Schaltwerk 2015 project, two new production halls were built and the manufacturing equipment was modernized. Modern switchgears are produced on 330,000 square metres of space in the switchgear plant. With a company-wide competence center for switchgear technology, the plant is in the vanguard of research and development in its technology field. Even after an extensive modernization, the historic buildings still comprise a major part of the plant today. The high-rise is also still in operation, although for reasons of fire safety, only up to the seventh story. However, production in the historic building was already discontinued in 2002 – after the last user of the facility, the low-voltage division, had moved out. Today, the remaining space is occupied by offices and the training center.

Within the scope of the "Siemensstadt²" project, the switchgear plant is also part of the long-term transformation into a modern, urban neighborhood of the future.